dude built a secret apartment in an unused corner of a busy shopping mall, and lived there for 4 years before being discovered 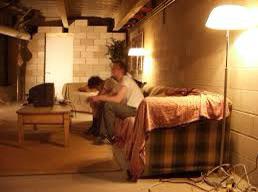 This reminds me of an episode of a TV show called (I think) «How Did They Do It?» that was on about 15 years ago. It was kind of an upside down version of the traditional «Who Dunnit» crime show, where they started each episode by telling you «Who Dunnit», i.e. who was caught and convicted for some seemingly impossible and unsolvable crime, then the show was about HOW they did it.

There was an episode about a guy who escaped from a prison , but he was kinda lost and had nowhere to go and nowhere to live. He was browsing through a Toys R Us (?) store and hid inside the store at closing time to get locked in. Roaming the store during the night, he discovered a void, essentially a small hidden room under a stairwell accessible via a hole or grate hidden by some furniture. He started hiding inside the tiny room during the day and coming out at night to roam the store. He also would sneak out of the hole when the store was open to go out to get food or other necessities. By stealing items from the store displays or by sneaking small items into the store during business hours passing as a customer, he created a cozy little apartment for himself and lived there for some length of time before getting caught.

<edit> Yeah, I remembered some of the details wrong. He escaped from prison. Here’s an article about him.